I have just joined a stock images resource website that is launching soon called Ticky Box Images. The peeps that are heading this up seem super cool and after meeting with them yesterday, I started thinking carefully of all the photographs I have taken over the years and I remembered this one that I shot last year in Soweto.

Lance Armstrong was here to launch Unite for Health and I was commissioned to shoot photographs for media. Personally, I was really upset that Lance was a bit of a chop. He walked through Soweto like a movie star with sunglasses on and never even greeted the children who were there to welcome him. They were singing songs for him while he walked down the red carpet. This bugged the hell out of me so I just started shooting photographs of the children instead and I remember getting into trouble for concentrating on the wrong subject but I did have a lot of fun.

This photo is of me being bombarded by a bunch or rad little children, majority of whom were super sick. I kept showing them what they looked like on the camera (thanks to digital) and they all wanted to see at the same time so I would show them and then shoot another and then show them again. This is just me turning the camera over and shooting while they were trying to see the screen. You can see me in the bottom right corner.

That was a fun day and a day that I got a lot of respect for Gerry Rantseli because she was right there with the children, not a bit bothered by trying to be a celebrity. 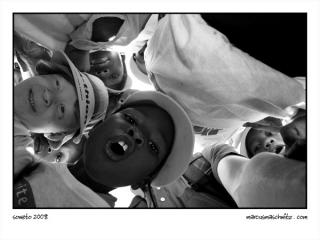